If you were to name all the biggest factions in WWE history you’d say names like The Four Horsemen, The NWO, Evolution and most recently the SHIELD. However, one name that should be on this list is the Nexus.

The Nexus could have completely changed the WWE. The faction was created with the whole first season of the WWE show NXT and was led by NXT Season 1 winner Wade Barrett. The group’s first target was John Cena. This created several memorable moments where Cena was attacked, especially their attack on their debut, where they destroyed the whole of ringside and took out everyone in their path of destruction. This was probably the best debut possible for The Nexus. It should’ve foreshadowed the fact that they were going to take over the WWE. Unfortunately for them only one of the original 8 members became a legend in Daniel Bryan.

One of the feuds pinnacle points was a 7-on-7 elimination match at the 2010 SummerSlam. John Cena was the only one left on Team WWE when he suddenly overcame all of the obstacles to eliminate the final two members of The Nexus, including Wade Barrett.

A lot of The Nexus momentum was stopped at Summerslam 2010, but Barrett continued to feud with Cena. Too bad the whole time it felt like a one-sided affair. Getting three different opportunities to win the WWE Championship, Barrett fell short each time and Cena finally put the last nail in the coffin by annihilating Barrett in a Chairs Match during the TLC PPV. Barrett stayed with WWE for years to come waiting for his WWE Championship opportunity but it never came to fruition. Instead, he was a five-time Intercontinental Champion and a king of the ring winner. 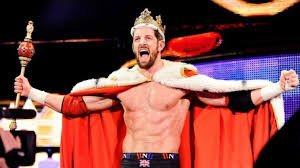 It’s a real shame that Barrett left WWE on bad terms. He could’ve been a top heel and could’ve made The Nexus take over WWE.